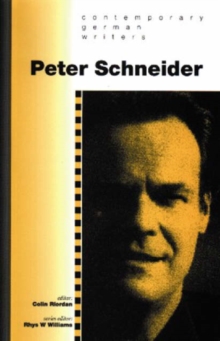 Peter Schneider is a seminal figure in contemporary German writing.

Initially prominent for his involvement in the student movement, he has consistently focused on problems at the heart of German national and cultural identity: the legacy of Auschwitz, the student revolt, neo-Nazi violence, the Green movement, and, above all, the division and subsequent unification of Germany.

From the influential "Lenz"""(1973) to the challenging yet accessible "Paarungen "(1992), Schneider's fiction and essays bring meticulous intellectual analysis to what he himself describes as a neglected 'deutsche Tradition von Ironie, Leichtigkeit, Humor'.

The first book in English or German to be devoted exclusively to Peter Schneider, this collection of essays is intended both as an introduction for the general reader and as a resource for the specialist.

It contains a previously unpublished piece by Schneider, together with a revealing interview and a biographical sketch.

The contributions on various aspects of the author's fiction and essays are complemented by the fullest bibliography to date of Schneider's primary works as well as a select list of secondary sources.