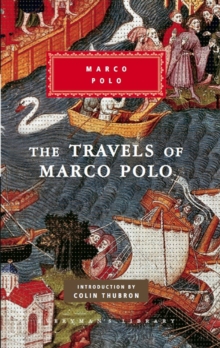 He isone of the few early adventurers whose name nearly everyone knows.

His book was one of the best-loved works of the Middle Ages, and has remained popular ever since.

At a time when China is again assuming global importance, his account of China under the Mongol emperor Khubilai Khan - the dazzlingly splendid capital in Beijing, the great southern metropolis of Hangzhou - is a classic reminder of the antiquity of Chinese power and civilization. Marco Polo also portrays countries and cities all along the trade route from the Mediterranean to Mongolia.

He reminds us that Iraq's present suffering is not unique by relating the story of the attack on Baghdad by Mongol forces in 1258.

He conveys the daunting prospect of the deserts of central Asia and the distant charms of Yunnan. And he reminds us of the huge merchant ships dominating China's trade with foreign countries, ships that far outstripped their European counterparts.

He even writes about Japan, the first European to do so.

His book was often thought of as a book of marvels, but one of its striking features to a contemporary reader is its clarity, realism and tolerance.

As this new edition shows, he sometimes exaggerates, but his reputation for making things up is quite unfair, as Colin Thubron makes clear in his introduction.

The original manuscript of Marco Polo's book is lost, and in the many later versions names and other details have become so garbled that it has been said that his itineraries are impossible to follow.

This new Everyman edition shows this need not be so.

It explains clearly all the references in the book, and shows in detail with new maps the routes described from Venice to Beijing, from Beijing to Burma, and from Beijing to south-east China.

It also provides an up-to-date history of the book and the controversies surrounding it.