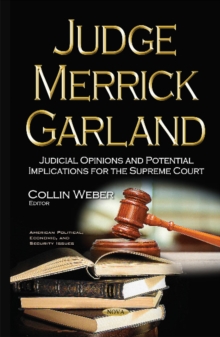 Court of Appeals for the District of Columbia Circuit (D.C.

Circuit) to fill the vacancy on the Supreme Court created by the unexpected death of Justice Antonin Scalia in February.

Judge Garland was appointed to the D.C. Circuit by President Clinton in 1997, and is currently its chief judge, an administrative position that rotates among the active judges on the circuit.

Prior to his appointment to the bench, Judge Garland served in the Criminal Division of the U.S.

Department of Justice, where he notably oversaw the prosecution of the 1995 Oklahoma City bombing case, as well as other cases.

It remains to be seen whether or how the Senate might proceed in considering Judge Garlands nomination; however, the nomination remains effective until it is withdrawn or this term of Congress ends, whichever occurs first.

This book provides an overview of Judge Garlands jurisprudence and discusses what the impact on the Court might be if he, or a judge of a similar judicial approach, were to be confirmed to succeed Justice Scalia.