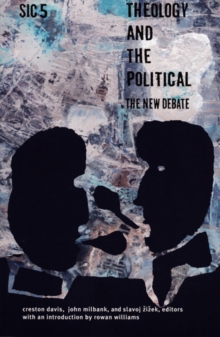 Theology and the Political : The New Debate, sic v Hardback

Part of the [sic] Series series

The essays in Theology and the Political-written by some of the world's foremost theologians, philosophers, and literary critics-analyze the ethics and consequences of human action.

They explore the spiritual dimensions of ontology, considering the relationship between ontology and the political in light of the thought of figures ranging from Plato to Marx, Levinas to Derrida, and Augustine to Lacan.

Together, the contributors challenge the belief that meaningful action is simply the successful assertion of will, that politics is ultimately reducible to "might makes right." From a variety of perspectives, they suggest that grounding human action and politics in materialist critique offers revolutionary possibilities that transcend the nihilism inherent in both contemporary liberal democratic theory and neoconservative ideology.Contributors.