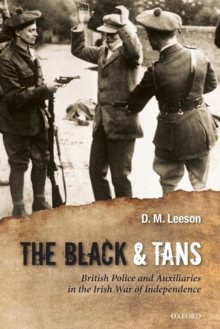 The Black and Tans : British Police and Auxiliaries in the Irish War of Independence, 1920-1921 Paperback / softback

This is the story of the Black and Tans and Auxiliaries, the most notorious police forces in the history of the British Isles.

During the Irish War of Independence (1920-1), the British government recruited thousands of ex-soldiers to serve as constables in the Royal Irish Constabulary, the Black and Tans, while also raising a paramilitary raiding force of ex-officers - the Auxiliary Division.

As the struggle for Irish independence intensified, the police responded to ambushes and assassinations by the guerrillas with reprisals and extrajudicial killings.

Prisoners and suspects were abused and shot, the homes and shops of their families and supporters were burned, and the British government was accused of imposing a reign of terror on Ireland.

Based on extensive archival research, this is the first serious study of the Black and Tans and Auxiliaries and the part they played in the Irish War of Independence.

Dr Leeson examines the organization and recruitment of the British police, the social origins of police recruits, and the conditions in which they lived and worked, along with their conduct and misconduct once they joined the force, and their experiences and states of mind.

For the first time, it tells the story of the Irishconflict from the police perspective, while casting new light on the British government's responsibility for reprisals, the problems of using police to combat insurgents, and the causes of atrocities in revolutionary wars.