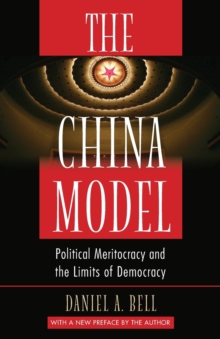 The China Model : Political Meritocracy and the Limits of Democracy Paperback / softback

But the Chinese political model does not fit neatly in either category.

Over the past three decades, China has evolved a political system that can best be described as "political meritocracy." The China Model seeks to understand the ideals and the reality of this unique political system.

How do the ideals of political meritocracy set the standard for evaluating political progress (and regress) in China?

Daniel Bell answers these questions and more. Opening with a critique of "one person, one vote" as a way of choosing top leaders, Bell argues that Chinese-style political meritocracy can help to remedy the key flaws of electoral democracy.

He discusses the advantages and pitfalls of political meritocracy, distinguishes between different ways of combining meritocracy and democracy, and argues that China has evolved a model of democratic meritocracy that is morally desirable and politically stable. Bell summarizes and evaluates the "China model"--meritocracy at the top, experimentation in the middle, and democracy at the bottom--and its implications for the rest of the world. A timely and original book that will stir up interest and debate, The China Model looks at a political system that not only has had a long history in China, but could prove to be the most important political development of the twenty-first century.