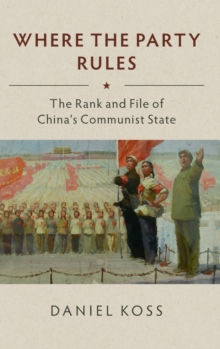 Where the Party Rules : The Rank and File of China's Communist State Hardback

In most non-democratic countries, today governing forty-four percent of the world population, the power of the regime rests upon a ruling party.

Contrasting with conventional notions that authoritarian regime parties serve to contain elite conflict and manipulate electoral-legislative processes, this book presents the case of China and shows that rank and-file members of the Communist Party allow the state to penetrate local communities.

Subnational comparative analysis demonstrates that in 'red areas' with high party saturation, the state is most effectively enforcing policy and collecting taxes. Because party membership patterns are extremely enduring, they must be explained by events prior to the Communist takeover in 1949.

Newly available evidence from the Great Leap Forward (1958-1961) and the Cultural Revolution (1966-1976) shows how a strong local party basis sustained the regime in times of existential crisis.