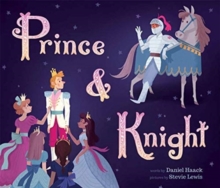 "Victorious... the premier queer-friendly fairy tale for this age set." KIRKUS REVIEWS"An illuminating fairy tale for young readers... a great addition to any library or classroom." THE SCHOOL LIBRARY JOURNALOnce upon a time there lived a charming prince.

His parents knew he couldn't rule the kingdom alone, so the three of them set out on a long journey across the land, to find him a suitable bride.

But it soon became clear that the Prince was looking for something very special, and none of the princesses were right for him.

Then, when a terrible dragon threatens the kingdom, the Prince meets a brave knight.

Could this be the Prince's one true love?A beautiful modern fairytale for children aged 4+, Prince and Knight was named to the American Library Association's 2019 Rainbow List Top Ten, was a Goodreads Choice Award nominee for Best Picture Book and was named a 2018 best children's book by Amazon, the Chicago Tribune, Kirkus Reviews and PopSugar.