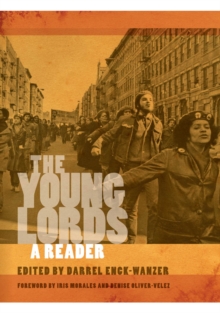 The Young Lords, who originated as a Chicago street gang fighting gentrification and unfair evictions in Puerto Rican neighborhoods, burgeoned into a national political movement in the late 1960s and early 1970s, with headquarters in New York City and other centers in Philadelphia, Boston, Los Angeles, and elsewhere in the northeast and southern California.

Part of the original Rainbow Coalition with the Black Panthers and Young Patriots, the politically radical Puerto Ricans who constituted the Young Lords instituted programs for political, social, and cultural change within the communities in which they operated. The Young Lords offers readers the opportunity to learn about this vibrant organization through their own words and images, collecting an array of their essays, journalism, photographs, speeches, and pamphlets. Organized topically and thematically, this volume highlights the Young Lords' diverse and inventive activism around issues such as education, health care, gentrification, police injustice and gender equality, as well as self-determination for Puerto Rico. In recovering these rare written and visual materials, Darrel Enck-Wanzer has given voice to the lost chorus of the Young Lords, while providing an indispensable resource for students, scholars, activists, and others interested in learning about this influential grassroots "street political" organization.