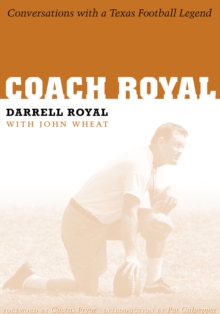 Many legendary men have been associated with University of Texas football, but for most fans one man will always be "Coach"-Darrell K Royal.

One of the most successful coaches in college football, Royal led the Longhorns to three national championships and eleven Southwest Conference titles during his twenty years (1956-1976) as UT's head coach.

He coached some of the Horns' best players, including future Heisman Trophy winner Earl Campbell, and was named NCAA Coach of the Year three times.

In 1969, an ABC-TV poll of sportswriters called Royal the Coach of the Decade.

In 1996 UT recognized his unrivalled contribution to Longhorn football when it designated Memorial Stadium the Darrell K Royal-Texas Memorial Stadium in his honor. Now, for the first time, Darrell Royal tells his life story in his own words.

He remembers growing up poor in Hollis, Oklahoma, during the Great Depression, and describes playing college football for the University of Oklahoma and then coaching a succession of college teams and one pro team before settling in at UT for the rest of his career.

He gives a fascinating, behind-the-scenes look at Longhorn football during his time-recruiting strategies, coaching techniques, the famous wishbone offense, unforgettable wins and losses, and his impressions of rival teams and coaches, including Bear Bryant of Texas A&M and Alabama and Frank Broyles of Arkansas. Proving that he's still the same straight shooter as always, Darrell Royal even discusses some of the controversies he's dealt with, including early charges of racism in the UT football program, the impact of Title IX on college athletics, his association with Jim Bob Moffett and the Freeport-MacMoRan Corporation, his longtime friendship with Willie Nelson, and his decision to retire from coaching.

But whether he's describing the tough times he's faced professionally and personally or the rewards of being UT's most beloved coach and goodwill ambassador, Royal maintains the same plainspoken honesty and sense of honor that-as much as the winning seasons-have made him a legend to so many people.