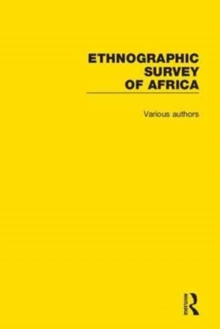 Routledge is proud to be re-issuing this landmark series in association with the International African Institute.

The series, originally published between 1950 and 1977, collected information on the peoples of Africa, using all available sources: archives, memoirs and reports as well as ethnographic research which, in 1945, had only just begun.

The volumes are supplemented with maps, which will be available to view on https://www.routledge.com/ or available as pdfs from the publishers.