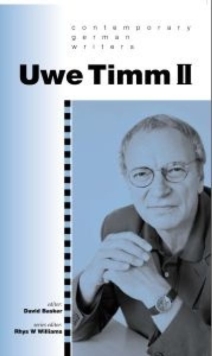 Uwe Timm is one of the most prominent, prolific and influential writers in contemporary German literature.

His work addresses the dominant cultural themes in contemporary Germany, including memory, biography and Vergangenheitsbewaltigung.

Books in the "CGW" series originate in visits and lecturers to the Department of German at the University of Wales Swansea by prolific and critically acclaimed German writers.

Uwe Timm's first visit to the Centre for Contemporary German Literature in Swansea produced one of the strongest volumes in the "Contemporary German Writers" series, and members of staff in the department have continued fruitful collaboration with the author in a number of areas.

Timm continues to enjoy a considerable popular and critical reputation in Germany.

Since the first CGW volume appeared, Timm has published a series of critically acclaimed works which justify a new volume, building on the success of the first. The first volume ends with Johannisnacht (1996); the second looks at his work since then and includes: a piece of previously unpublished writing by Timm; an overview, in German, of his career since 1996; an interview with Timm about his career since 1996; separate critical essays on the following: Nicht morgen, nicht gestern (1999, which includes a story set in Swansea); Rot (2001); Am Beispiel meines Bruders (2003); Der Freund und der Fremde (2005); The volume concludes with an updated bibliography.