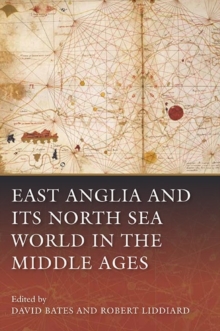 East Anglia was a distinctive English region during the Middle Ages, but it was one that owed much of its character and identity to its place in a much wider "North Sea World" that stretched from the English Channel to Iceland, the Baltic and beyond.

Relations between East Anglia and its maritime neighbours have for the most part been peaceful, involving migration and commercial, artistic, architectural and religious exchanges, but have also at times been characterised by violence and contestation.

All these elements have played a significant role in processes of historical change that have shaped the history both of East Anglia and its North Sea world. This collection of essays discusses East Anglia in the context of this maritime framework and explores the extent to which there was a distinctive community bound together by the shared frontier of the North Sea during the Middle Ages.

It brings together the work of a range of international scholars and includes contributions from the disciplines of history, archaeology, art history and literary studies. Professor David Bates is Professorial Fellow in History, Robert Liddiard is Professor of History, at the University of East Anglia. Contributors: Anna Agnarsdottir, Brian Ayers, Wendy R.