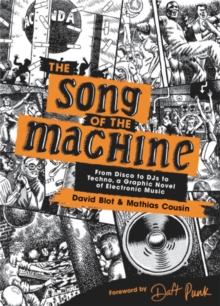 The Song of the Machine : From Disco to DJs to Techno, a Graphic Novel of Electronic Music Hardback

Originally published in 2000 by Editions Allia in France, The Song of the Machine is a richly detailed graphic novel based on the history of electronic music.

From the disco of the 1970's to the rave culture of the 1990's, The Song of the Machine introduces readers to the stars and forgotten heroes of the genre: David Mancuso, the founder of "The Loft" in New York; Larry Levan, resident DJ at the Paradise Garage, the prototype of the modern dance club; Frankie Knuckles, the "Godfather of House Music"; and many more.

Set in Studio 54 in New York, the Palace in Paris, the Hacienda in Manchester, and other legendary dance venues around the world, The Song of the Machine is told through exciting graphic novel style that evolves with the era of music it describes, from a black-and-white style reminiscent of Robert Crumb to full-colour with stripped-down lines.

Pulsing through the roof with anecdotes, drugs, and unforgettable parties, The Song of the Machine recounts all the influences, inspirations, and fates of the people who created a revolutionary kind of music.