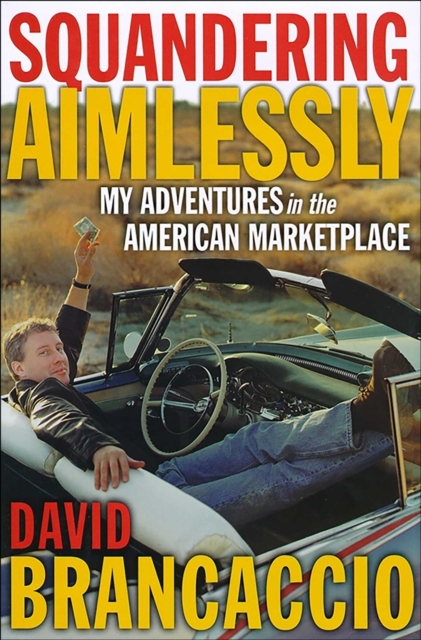 Squandering Aimlessly : My Adventures in the American Marketplace EPUB

Poor, misguided fellow. David Brancaccio, host of public radio's rambunctious and eclectic business program Marketplace, used to think the big problem with money was getting some. Didn't he understand that during a time of bounty the big problem is knowing what to do with money once you have it? It took a conversation with one of the richest guys in America to set him straight.
"I think Warren Buffett's got the problem and Gates has the problem and Bloomberg's got the problem," the billionaire said. "And the problem doesn't just have to be at our level. It can be with people who have just a couple of million bucks." It was the second "just" in that sentence that made tears well up in Brancaccio's eyes.
Most of us once thought the problem was getting some money. Now what?
Squander: to spend or use something precious in a wasteful way. Squandering ranks even below "leaving it in a passbook savings account" on the list of the greatest personal finance sins of our age, according to Brancaccio, who hit the road to determine the right answer to the question of what to do with money. Brancaccio gets this question from Marketplace listeners all the time: What does one do with a lump sum, perhaps the proceeds from some stock options, the profit on the sale of a house, an inheritance, a bonus, a settlement, or even a modest accumulation in a savings account?
A natural storyteller, Brancaccio has a clear, intelligent, and delightfully offbeat way of explaining to his listeners the complexities of business, investing, and the economy. He has access to rivers of market information that should help answer this question of what to do with money. But data do not necessarily equal wisdom, so Brancaccio hit upon the idea of venturing out on a random "walk" to acquire some street smarts.
Imagining a windfall of his own and haunted by his own checkered history with money, Brancaccio embarked on a funny and irreverent personal finance pilgrimage. His travels took him from Minnesota's Mall of America to New York City's Wall Street to one of the poorest towns in the West. He encountered entrepreneurs in California, homeowners in New York, retirees in Arizona, and some folks following their lifelong dreams in Texas. A drifter in a desert offered advice. So did a U.S. secretary of the treasury.
Along the way, Brancaccio was challenged by a cascade of practical and philosophical issues: If consumption drives the economy, is there something wrong with saving? Is there such a thing as a socially responsible investment? Is charity an investment? If you can't beat a Las Vegas casino, can you beat the stock market?
While Brancaccio's journey was a personal one, his eye-opening adventures reveal a great deal about attitudes toward money in America at the dawn of the new century -- and they provide entertaining lessons about how best to spend, invest, and save.