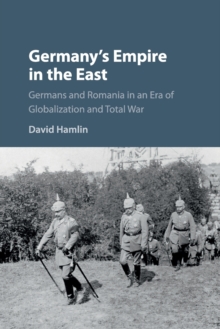 Germany's Empire in the East : Germans and Romania in an Era of Globalization and Total War Paperback / softback

This book puts German policy toward Romania and the German East into a global context.

One of the signal events of the twentieth century was Germany's effort to construct an empire in Europe modeled on the European experience outside Europe.

The turn to European empire resulted less from the dynamics of capitalist expansion than from a deep crisis in global political and economic order.

Confronted with the global economic and political power of the western allies, the Germans turned to Eastern Europe to construct a dependent space, tied to Germany as Central America was to the US.

The First World War transformed how Germans thought about international order, empire and the nature of Romanians.

The domestic consequences of Germany's eviction from global markets authorized deep interventions in Romanian society to establish a pre-eminent position for the German state inside Romania.