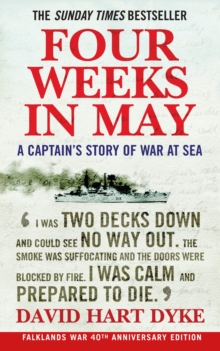 Four Weeks in May : A Captain's Story of War at Sea Paperback / softback

A Sunday Times BestsellerElectric... Outstanding. - John Shirley, GuardianHMS Coventry's job during the Falklands War was to provide early warning of approaching enemy aircraft, and fend off any incoming threat to the highly valuable ships and aircraft behind her.

On 25 May, Coventry was attacked by two Argentine Skyhawks and hit by three bombs.

The explosions tore out most of her port side and killed 19 of the crew, leaving many others injured.

Within twenty minutes she had capsized, and was to sink early the next day.

In her final moments, when all those not killed by the explosions had been evacuated from the ship, her Captain, David Hart Dyke, himself badly burned, climbed down her starboard side and into a life-raft.

This is his compelling and moving story.