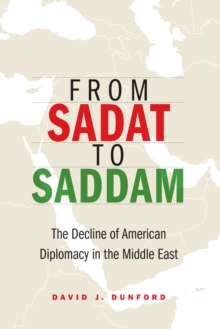 From Sadat to Saddam : The Decline of American Diplomacy in the Middle East Hardback

From Sadat to Saddam offers a fresh perspective on the politicization of the U.S. diplomatic service and the militarization of U.S. foreign policy. The narrative begins with the 1981 assassination of Egyptian President Sadat, continues through two Gulf wars and ends with US withdrawal of combat troops from Iraq in 2011. The book recounts successes along with spectacular failures of U.S. foreign policy. The book addresses the basic question of how and why we find ourselves today in endless military conflict and argues that it is directly related to the decline in reliance on our diplomatic skills. From Sadat to Saddam is a personal, in-depth, look by a career diplomat at how U.S. soft power has been allowed to atrophy. It chronicles three decades of dealing not just with foreign policy challenges and opportunities, but with the frustrations of working with bureaucrats and politicians who don't understand the world and are unwilling to listen to those who do. The book makes clear that the decline of our diplomatic capability began well before the election of the Trump administration. It recommends that, instead of trying to make soldiers into diplomats and diplomats into soldiers, that we invest in a truly professional diplomatic service.