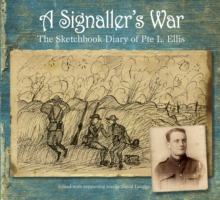 As the First World War roared into its second year, 17-year-old Lawrence Ellis marched into his recruitment office and signed up, eager to fight for King and Country.

Underage, as so many were, it wasn't until he had cut his teeth in the Royal Field Artillery that Ellis joined the Corps of Royal Signallers. It was some years after the war, however, that the private began to commit his memories to art and words.

A Signaller's War includes a poignant selection of Ellis' images, portraying the conditions, experiences and hopes of the common soldier in the trenches of the Western Front.

Often humorous, sometimes horrific, always honest, this collection is a unique insight into the life of a young volunteer who grows from a boy to a man during his service, after witnessing the aftermath of the Somme and action at Cambrai.

He was not a trained artist, writer or diarist, yet his work demonstrates a skill and sensitivity that will leave the reader breathless.