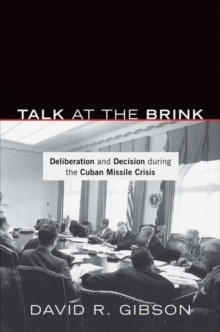 Talk at the Brink : Deliberation and Decision During the Cuban Missile Crisis Hardback

In October 1962, the fate of the world hung on the American response to the discovery of Soviet nuclear missile sites in Cuba.

That response was informed by hours of discussions between John F.

Kennedy and his top advisers. What those advisers did not know was that President Kennedy was secretly taping their talks, providing future scholars with a rare inside look at high-level political deliberation in a moment of crisis.

Talk at the Brink is the first book to examine these historic audio recordings from a sociological perspective.

It reveals how conversational practices and dynamics shaped Kennedy's perception of the options available to him, thereby influencing his decisions and ultimately the outcome of the crisis.

David Gibson looks not just at the positions taken by Kennedy and his advisers but how those positions were articulated, challenged, revised, and sometimes ignored.

He argues that Kennedy's decisions arose from the intersection of distant events unfolding in Cuba, Moscow, and the high seas with the immediate conversational minutia of turn-taking, storytelling, argument, and justification. In particular, Gibson shows how Kennedy's group told and retold particular stories again and again, sometimes settling upon a course of action only after the most frightening consequences were omitted or actively suppressed.

Talk at the Brink presents an image of Kennedy's response to the Cuban missile crisis that is sharply at odds with previous scholarship, and has important implications for our understanding of decision making, deliberation, social interaction, and historical contingency. 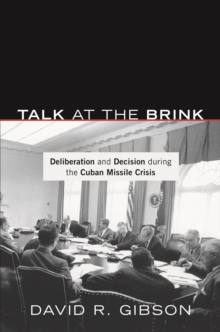 Talk at the Brink