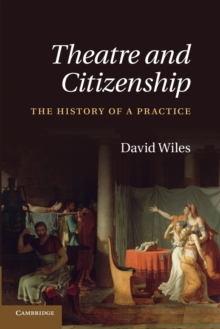 Theatre and Citizenship : The History of a Practice Paperback / softback

Citizenship is a contested term which today inspires both policy-makers and radical activists.

David Wiles traces this ideal to its classical roots, examining both theatre and citizenship as performative practices.

Wiles examines how people function collectively rather than as individuals, for example through choruses or crowd behaviour in the auditorium.

He explores historic tensions between the passivity of the spectator and the active engagement of a citizen, paying special attention to dramatists like Aristophanes, Machiavelli and Rousseau who have translated political theory into a theatre of, and for, active citizens.

The book is a fresh investigation of familiar and less familiar landmarks of theatre history, revealing how plays function as social and political events.

In this original approach to theatre history, Wiles argues that theatre is a powerful medium to build communities, and that attempts to use it as a vehicle for education are very often misplaced.