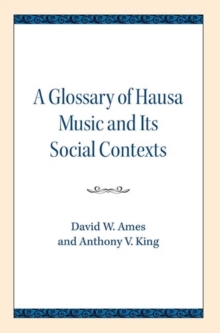 Glossary of Hausa Music and Its Social Contexts Paperback / softback

The richness, variety, and complexity of the culture of the Hausa city-states are illustrated in microcosm in Glossary of Hausa Music and Its Social Contexts, in which several hundred Hausa terms for music are collected. David W. Ames and Anthony V. King concentrate on the kingdoms of Zaria and Katsina, but include historically noteworthy terms from other areas.

This compilation not only presents a technical glossary of musical instruments and sound production but also reveals the musical life of a people and the socio-cultural context of musical performance.

Consideration is given to Hausa folklore pertaining to music - proverbs, riddles, and traditional occupational jokes.