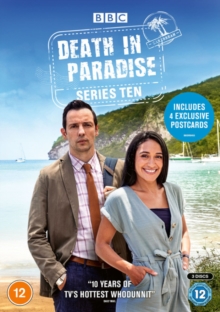 All eight episodes from the tenth series of the BBC comedy drama set on the Caribbean island of Saint Marie.

In this series, new Detective Inspector Neville Parker (Ralf Little) is assisted by the return of Detective Sergeant Florence Cassell (Joséphine Jobert), but will the pair get along?

Meanwhile, a new recruit to the island's police force is already well known to many of the officers.