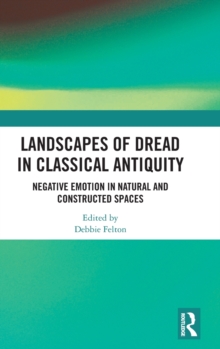 Over the last two decades, research in cultural geography and landscape studies has influenced many humanities fields, including Classics, and has increasingly drawn our attention to the importance of spaces and their contexts, both geographical and social: how spaces are described by language, what spaces are used for by individuals and communities, and how language, use, and the passage of time invest spaces with meaning.

In addition to this 'spatial' turn in scholarship, recent years have also seen an 'emotive' turn - an increased interest in the study of emotion in literature. Many works on landscape in classical antiquity focus on themes such as the sacred and the pastoral and the emotions such spaces evoke, such as (respectively) feelings of awe or tranquillity in settings both urban and rural.

Far less scholarship has been generated by the locus terribilis, the space associated with negative emotions because of the bad things that happen there.

In short, the recent 'emotive' turn in humanities studies has so far largely neglected several of the more negative emotions, including anxiety, fear, terror, and dread. The papers in this volume focus on those neglected negative emotions, especially dread - and they do so while treating many types of space, including domestic, suburban, rural and virtual, and while covering many genres and authors, including the epic poems of Homer, Greek tragedy, Roman poetry and historiography, medical writing, paradoxography and the short story.