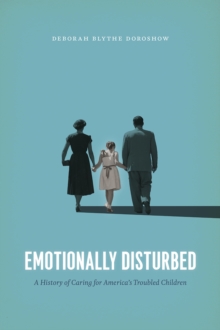 Before the 1940s, children in the United States with severe emotional difficulties would have had few options for care.

The first option was usually a child guidance clinic within the community, but they might also have been placed in a state mental hospital or asylum, an institution for the so-called feebleminded, or a training school for delinquent children.

Starting in the 1930s, however, more specialized institutions began to open all over the country.

Staff members at these residential treatment centers shared a commitment to helping children who couldn't be managed at home.

They adopted an integrated approach to treatment, employing talk therapy, schooling, and other activities in the context of a therapeutic environment. Emotionally Disturbed is the first work to examine not only the history of residential treatment, but also the history of seriously mentally ill children in the United States.

Residential treatment centers and the people who worked there built physical and conceptual structures that identified a population of children who were alike in distinctive ways.

Emotional disturbance became a diagnosis, a policy problem, and a statement about the troubled state of postwar society, as over the next couple of decades Americans went from pouring private and public funds into the care of troubled children to abandoning them almost completely.

Charting the decline of residential treatment centers in favor of domestic care-based models in the 1980s and 1990s, this history is a must-read for those wishing to understand how our current child mental health system came to be.