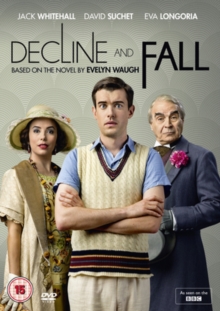 Jack Whitehall, Eva Longoria and David Suchet star in this three-part BBC comedy based on the novel by Evelyn Waugh, set in the 1920s.

After being the victim of an unfortunate prank by the Bollinger Club, divinity student Paul Pennyfeather (Whitehall) is expelled from Oxford University and his dream of becoming a priest is shattered.

With no money to fall back on, Paul takes up a teaching post at the Welsh boarding school Llanabba, which he quickly realises he despises.

However, his fortunes change after he is introduced to wealthy widow Margot Beste-Chetwynde (Longoria), whose son attends the school.