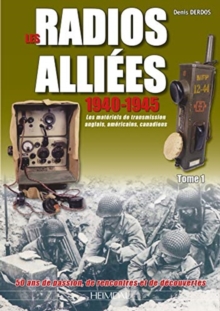 "On 6 June 1944, on the beaches, as well as inland, with very few exceptions, all orders and reports for all the fighting arms were transmitted by electric radios." Until now, no encyclopaedia has ever presented so much transmission equipment to such a large number of readers.

Although not exhaustive, Les Radios alliees, 1940-1945's two volumes invite you to delve into a world that many collectors of WWII military memorabilia don't even suspect exists. Radio is a world that has yet to be discovered, a world where it is still possible to find a genuine collector's item that has seen combat. Any enthusiast reading about the fighting in Europe - from the Normandy beaches to VE Day - should know how complex the means of radio-electric communication used by the Allies were.

The descriptions accompanying the apparatus are taken entirely from the original technical data and specifications.

No less than 160 transmission apparatuses - BC 611, BC 1306, Wireless Set N Degrees 18, N Degrees 19 or the Amplifiers RF N Degrees 2 and Wavemeters Class D, etc. - used by the Anglo-Saxon forces (English, American, Canadian, New-Zealand and French) are all fully shown as they were, in all their complexity and with all their accessories. Text in French.