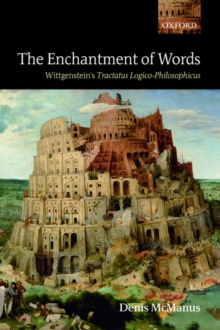 by Denis (University of Southampton) McManus

Recent years have seen a great revival of interest in Wittgenstein's early masterpiece, the Tractatus Logico-Philosophicus.

The Enchantment of Words is a study of that book, offering novel readings of all its major themes and shedding light on issues in metaphysics, ethics and the philosophies of mind, language, and logic.

McManus argues that Wittgenstein's aim in this deeply puzzling work is to show that the 'intelligibility of thought' and the 'meaningfulness of language', which logical truths would delimit and metaphysics and the philosophy of mind and language would explain, are issues constituted by confusions.

The root ofthat misperception is our confusedly endowing words with a life of their own: we 'enchant', and are 'enchanted by', words, colluding in a confusion that transposes on to them, and the world which we then see them as 'fitting', responsibilities that are actually ours to bear.

Such words promise tospare us the trouble, not only of thinking, but of living.

In presenting this view, McManus offers readings of all of the major themes of the Tractatus, including its discussion of logical truth, objects, names, inference, subjectivity, solipsism and the ineffable; McManus offers novel explanations of what is at stake in Wittgenstein's comparison of propositions with pictures, of why Wittgenstein declared the point of the Tractatus to be ethical, of how a bookwhich infamously declares itself to be nonsensical can both clarify ourthoughts and require of us that we exercise our capacity to reason in reading it, and of how Wittgenstein later came to re-evaluate the achievement of the Tractatus.