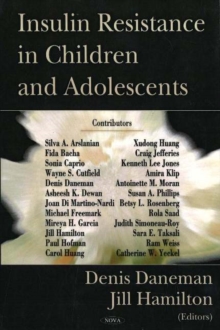 Insulin resistance is a simple concept with complex ramifications.

The notion that insulin action differs in different people and under different circumstances has been known for a considerable period of time.

For example, it has long been recognised that young children with type 1 diabetes are 'sensitive' to small changes in insulin dosage, while obese adults with type 2 diabetes may require huge doses of insulin to establish metabolic control.

What is more recent is the finding that insulin action differs in a number of different and very common conditions and may in fact be a central contributor to the pathogenesis of some or all of these, including obesity, atherogenesis, type 2 diabetes, the metabolic syndrome, hypertension, hyperandrogenism, polycystic ovarian syndrome and perhaps some types of malignancy.

The increasing burden of obesity and its ramifications has firmly and increasingly focused the spotlight on insulin resistance in recent years.

Yet most of this attention has been paid to adults and much less to the consequences and causes of insulin resistance in children and teens.

This is despite the fact that many of the adult diseases associated with insulin resistance, such as obesity, type 2 diabetes, atherosclerosis, have their origins in childhood.

Furthermore, insulin resistance has long been documented in certain circumstances in children and teens with type 1 diabetes (e.g. at disease onset, with episodes of ketoacidosis or poor metabolic control), and is likely an adaptive response contributing to the growth spurt of puberty.

More recently, in utero contributions to programming of insulin resistance and its consequences have been brought to light, initially by Barker and his colleagues who have championed the field of foetal origins of adult disease'.

Given the rapid explosion in research in insulin resistance and its increasing importance throughout the life span, we felt it timely to bring together in one place a thorough analysis of the field.

The objectives of this book are two-fold: first, to educate the reader about the importance and spectrum of insulin resistance in the childhood population, and, second, to help stimulate and focus further investigation in this exciting area.

We have attempted to gather the contributions of leaders in the field of insulin resistance in the paediatric population.

The sequence of the chapters moves from basic mechanisms, to measurement of insulin sensitivity, to description of specific disorders, to prevention and management.