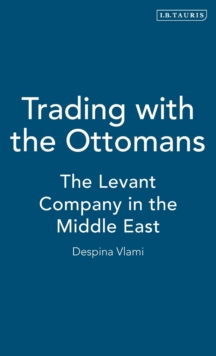 Trading with the Ottomans : The Levant Company in the Middle East Hardback

Arguably, trade is the engine of history, and the acceleration in what you mightcall 'globalism' from the beginning of the last millennium has been driven by communities interacting with each other through commerce and exchange.

The Ottoman empire was a trading partner for the rest of the world, and therefore the key link between the west and the middle east in the fifteenth to nineteenth centuries. much academic attention has been given to the east india Company, but less well known is the Levant Company, which had the exclusive right to trade with the Ottoman empire from 1581 to 1825.

The Levant Company exported British manufacturing, colonial goods and raw materials, and imported silk, cotton, spices, currants and other Levantine goods. it set up 'factories' (trading establishments) across Ottoman lands and hired consuls, company employees and agents from among its members, as well as foreign tradesmen and locals. here, despina vlami outlines the relationship between the Ottoman empire and the Levant Company, and traces the company's last glimpses of prosperity combined with slump periods and tension, as both the Ottoman and the British empire faced significant change and war. she points out that the growth of 'free' trade and the end of protectionism coincided with modernisation and reforms, and while doing so, provides a new lens through which to view the decline of the Ottoman world.

Merchants on the Mediterranean