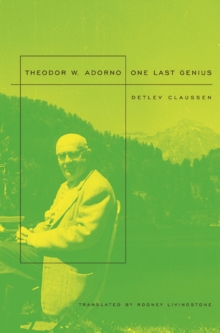 He was famously hostile to biography as a literary form. And yet this life of Adorno by one of his last students is far more than literary in its accomplishments, giving us our first clear look at how the man and his moment met to create "critical theory." An intimate picture of the quintessential twentieth-century transatlantic intellectual, the book is also a window on the cultural ferment of Adorno's day-and its ongoing importance in our own. The biography begins at the shining moment of the German bourgeoisie, in a world dominated by liberals willing to extend citizenship to refugees fleeing pogroms in Eastern Europe.

Detlev Claussen follows Theodor Wiesengrund Adorno (1903-1969) from his privileged life as a beloved prodigy to his intellectual coming of age in Weimar Germany and Vienna; from his exile during the Nazi years, first to England, then to the United States, to his emergence as the Adorno we know now in the perhaps not-so-unlikely setting of Los Angeles.

There in 1943 with his collaborator Max Horkheimer, Adorno developed critical theory, whose key insight-that to be entertained is to give one's consent-helped define the intellectual landscape of the twentieth century. In capturing the man in his complex relationships with some of the century's finest minds-including, among others, Arnold Schoenberg, Walter Benjamin, Thomas Mann, Siegfried Kracauer, Georg Lukacs, Hannah Arendt, and Bertolt Brecht-Claussen reveals how much we have yet to learn from Theodor Adorno, and how much his life can tell us about ourselves and our time.