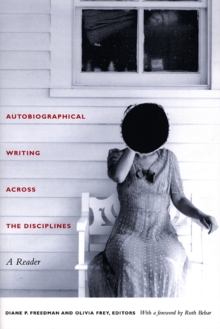 Autobiographical Writing Across the Disciplines : A Reader Hardback

Autobiographical Writing Across the Disciplines reveals the extraordinary breadth of the intellectual movement toward self-inclusive scholarship.

Pioneers in the development of the hybrid genre of personal scholarship, the writers whose work is presented here challenge traditional modes of inquiry and ways of knowing.

In assembling their work, editors Diane P. Freedman and Olivia Frey have provided a rich source of reasons for and models of autobiographical criticism.The editors' introduction presents a condensed history of academic writing, chronicles the origins of autobiographical criticism, and emphasizes the role of feminism in championing the value of personal narrative to disciplinary discourse.

The essays are all explicitly informed by the identities of their authors, among whom are a feminist scientist, a Jewish filmmaker living in Germany, a potential carrier of Huntington's disease, and a doctor pregnant while in medical school.

Whether describing how being a professor of ethnic literature necessarily entails being an activist, how music and cooking are related, or how a theology is shaped by cultural identity, the contributors illuminate the relationship between their scholarly pursuits and personal lives and, in the process, expand the boundaries of their disciplines.