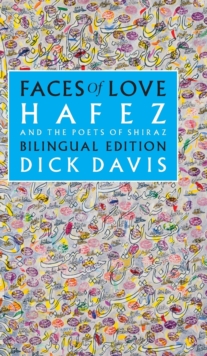 Faces of Love : Hafez and the Poets of Shiraz Hardback

This bilingual edition of Faces of Love: Hafez and the Poets of Shiraz has the original Persian verses facing the English translations. The three Shirazi poets whose work is featured here, Hafez, Jahan Malek Khatun, and Obayd-e Zakani, lived at the same time (the mid fourteenth century), and certainly knew of one another – Obayd wrote at least two poems about Jahan Khatun, and Jahan Khatun quotes Hafez in one of her poems. It’s extremely likely that, during the 1340s and early 1350s at least, they also knew one another personally. The poetic life of the city during this period centered on the court of the ruling family, the Injus; Jahan Khatun was an Inju princess, while her uncle, Abu Es’haq, the head of the family and the ruler of the city, was a great patron of poets.