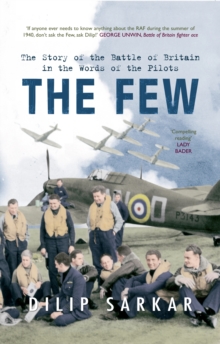 The Few : The Story of the Battle of Britain in the Words of the Pilots EPUB

The Luftwaffe's intention was to destroy Fighter Command, domination of the skies being crucial to Hitler's invasion plan.

During that fateful summer, young RAF fighter pilots, flying Spitfires and Hurricanes, were scrambled time and time again to face insuperable odds - and the Luftwaffe was, until that point, unbeaten.

The enemy fighter pilots, in their brightly painted Messerschmitt 109s, were the most experienced in the world.

But somehow the RAF pilots, fighting desperately in a spider's web of intricate vapour trails, and with sudden and violent death an ever present companion, prevailed.

Afterwards, Churchill paid homage to them all: 'Never in the field of human conflict has so much been owed by so many to so few'.

A legend had been born. Dilip Sarkar has been fascinated by the Battle of Britain since childhood and began seriously researching the subject in the 1970s.

He wrote thousands of letters and travelled extensively over the UK interviewing the fabled â€˜Fewâ€™.

Over the last 30 years he has interviewed more Battle of Britain survivors than any other author and his archive is a unique collection of veteransâ€™ â€˜voicesâ€™.

In this new book Dilip Sarkar chronicles the Battle of Britain from start to finish drawing extensively from his interviews with pilots.