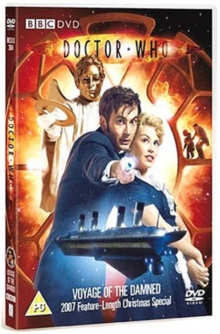 Doctor Who - The New Series: The Voyage of the Damned DVD

When the Tardis collides with a spaceship based on the RMS Titanic during a Christmas party, the Doctor (David Tennant) uncovers a threat to the whole human race.

With the help of some aliens, saboteurs, robot angels and a waitress named Astrid (Minogue), the Doctor must take on a race called the Hosts to save the ship's crew and the rest of humanity.