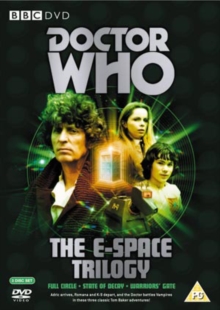 In 'Full Circle', it soon becomes clear that all is not well when the Tardis scanner shows the Doctor (Tom Baker), Romana (Lalla Ward) and K9 an image of Gallifrey, only for them to discover an expanse of marshland when they venture outside the ship.

The Doctor realizes that they have somehow travelled through a charged Vacuum Emboitment into E-Space where he meets the local Alzarians - themselves preparing to retreat to their damaged spacecraft, the Starliner, in an attempt to escape the lethal Mistfall.

In 'State of Decay', when the Doctor, Romana and K9, still trapped in E-Space, land on a medieval planet, they do not realize that Adric has stowed away on the Tardis with them.

They are soon in need of his help when they discover that the local society is ruled over by three vampire lords - Zargo (William Lindsay), Camilla (Rachel Davies), and Aukon (Emrys James).

Finally, in 'Warrior's Gate', the Doctor may finally be on the verge of escaping E-Space when the Tardis is hijacked by Biroc (David Weston), a time-sensitive Tharil on the run from Captain Rorvik (Clifford Rose) and his crew of privateers.

However, when K9 is damaged by the Time Winds, it becomes clear that he will not be able to make the return journey.