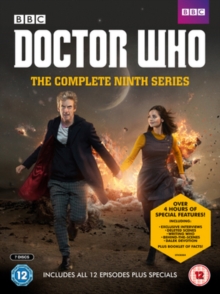 All 12 episodes from the ninth series of the relaunched sci-fi adventure drama, with Peter Capaldi reprising his role as the legendary Time Lord.

This time around, the Doctor and his companion Clara Oswald (Jenna-Louise Coleman) take on enemies including The Master (Michelle Gomez), Davros (Julian Bleach) and the Daleks before trying to put a stop to a Zygon invasion of Earth.

The Doctor also finds himself in a nightmarish castle and must later return to his home planet of Gallifrey to confront the Time Lords.

The episodes are: 'The Magician's Apprentice', 'The Witch's Familiar', 'Under the Lake', 'Before the Flood', 'The Girl Who Died', 'The Woman Who Lived', 'The Zygon Invasion', 'The Zygon Inversion', 'Sleep No More', 'Face the Raven', 'Heaven Sent' and 'Hell Bent'.

The collection also includes the Christmas specials 'Last Christmas' and 'The Husbands of River Song'.