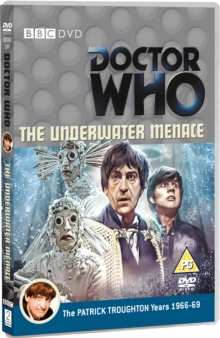 Doctor Who: The Underwater Menace DVD

Patrick Troughton stars as the Doctor in this serial from the fourth season of the sci-fi adventure drama.

After travelling in the Tardis to the lost city of Atlantis, the Doctor and his companions Polly (Anneke Wills), Ben (Michael Craze) and Jamie (Frazer Hines) are taken prisoner by the Atlantians leader Professor Zaroff (Joseph Furst).

As the scientist plots to destroy the planet the Doctor must find a way to stop him from executing his deadly plan.

Episodes two and three are fully restored while episodes one and four are presented using a restored soundtrack over photographic stills.