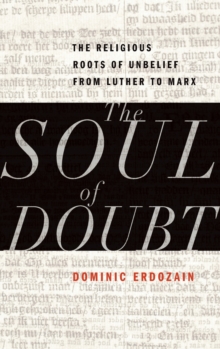 The Soul of Doubt : The Religious Roots of Unbelief from Luther to Marx Hardback

It is widely assumed that science is the enemy of religious faith.

The idea is so pervasive that entire industries of religious apologetics converge around the challenge of Darwin, evolution, and the "secular worldview." This book challenges such assumptions by proposing a different cause of unbelief in the West: the Christian conscience.

Tracing a history of doubt and unbelief from the Reformation to the age of Darwin and Karl Marx, Dominic Erdozain argues that themost powerful solvents of religious orthodoxy have been concepts of moral equity and personal freedom generated by Christianity itself. Revealing links between the radical Reformation and early modern philosophers such as Baruch Spinoza and Pierre Bayle, Erdozain demonstrates that the dynamism of the Enlightenment, including the very concept of "natural reason" espoused by philosophers such as Voltaire, was rooted in Christian ethics and spirituality.

The final chapters explore similar themes in the era of Darwin and Marx, showing how moral revolt preceded and transcended the challenges of evolution and "scientific materialism"in the unseating of religious belief.

The picture that emerges is not of a secular challenge to religious faith, but a series of theological insurrections against divisive accounts of Christian orthodoxy.