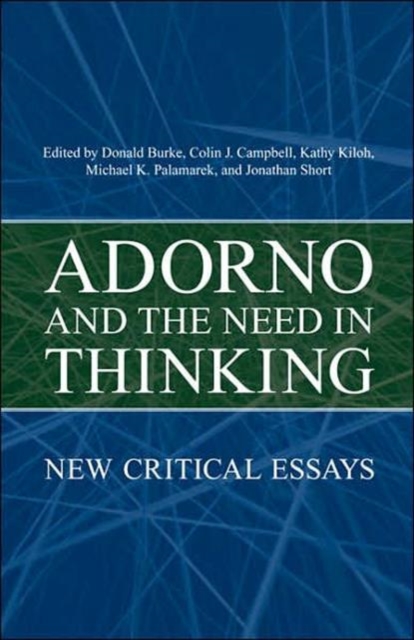 Adorno and the Need in Thinking : New Critical Essays Hardback

Few intellectual figures of the twentieth century dealt with such a vast scope of subjects as Theodor Adorno (1903-1969).

His insights, therefore, lend themselves to critical overview as many have cross-disciplinary relevance, appealing to scholars from a variety of backgrounds.

Adorno and the Need in Thinking examines questions dealt with in the works of Adorno, offering a glimpse at the development of his complex thought.

This collection of essays, though dealing with different topics from section to section, is unified by the idea that, at least in the English-speaking world, there are numerous facets of Adorno's work that have been hitherto neglected in terms of critical scholarship.

Adorno and the Need in Thinking addresses these forgotten nuances, whether they apply to questions of politics, language, metaphysics, aesthetics, ecology, or several of these at once.

Also included for the first time in English is Adorno's important early essay, "Theses on the Language of the Philosopher."At a time when Adorno scholarship is on the rise, this collection sheds light on new areas of critical research, adding another dimension to the existing literature on this most important intellectual.