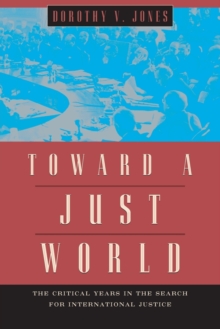 Toward a Just World : The Critical Years in the Search for International Justice Paperback / softback

A little over a century ago, there was no such thing as international justice, and until recently, the idea of permanent international courts and formal war crimes tribunals would have been almost unthinkable.

Yet now we depend on institutions such as these to air and punish crimes against humanity, as we have seen in the International Criminal Tribunal for Rwanda and the appearance of Serbian leader Slobodan Milosevic before the Tribunal for the Former Yugoslavia.

Toward a Just World tells the remarkable story of the long struggle to craft the concept of international justice that we have today.

Dorothy V. Jones focuses on the first half of the twentieth century, the pivotal years in which justice took on expanded meaning in conjunction with ideas like world peace, human rights, and international law.

Fashioning both political and legal history into a compelling narrative, Jones recovers little-known events from undeserved obscurity and helps us see with new eyes the pivotal ones that we think we know. Jones also covers many of the milestones in the history of diplomacy, from the Treaty of Versailles and the creation of the League of Nations to the Nuremberg war crimes tribunal and the making of the United Nations.