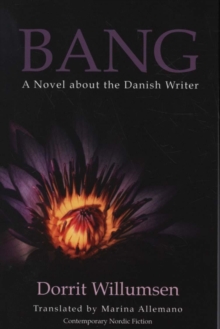 Bang : A Novel about the Danish Writer Paperback / softback

29 January 1912. In a train compartment in Ogden, Utah, a Danish author was found unconscious.

The 54-year-old Herman Bang was en route from New York to San Francisco as part of a round-the-world reading tour.

It was a poignant end for a man whose life had been spent on the move.

Having fled his birthplace on the island of Als ahead of the Prussian advance of 1864, he was later hounded out of Copenhagen, Berlin, Vienna and Prague by homophobic laws and hostility to his uncompromising social critique as journalist, novelist, actor and dramaturge.

Dorrit Willumsen re-works Bang's life story in a series of compelling flashbacks that unfold during his last fateful train ride across the USA.

Along the way, we are transported to an audience in St Petersburg with the Dowager Empress Maria Feodorovna, to a lovers' nest in a flea-ridden Prague boarding house, to the newsrooms and variety theatres of fin-de-siecle Copenhagen, and to a Norwegian mountainside, where Claude Monet has come to paint snow and lauds Bang's writing as literary impressionism.

A pioneering journalist, author and dramatist, Herman Bang (1857-1912) was a key figure in Scandinavia's Modern Breakthrough.