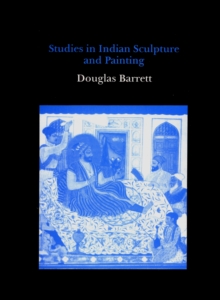 Douglas Barrett was one of the leading western authorities on the arts of India.

The articles brought together here are grouped into three separate sections.

The following section covers painting and sculpture in the Deccan, with five papers on the Amaravati school.

The final section is devoted to the sculpture of South India.

Contents: Preface Gandhara Bronzes Sculptures from Kashmir Bronzes from North-West India and Western Pakistan An Ivory Diptych The Facade of a Miniature Shrine from Kashmir A Terracotta Plaque of Mahisasuramardini The Early Phase at Amaravati Two Unpublished Sculptures from Amaravati Two Unpublished Sculptures from the Andhradesa Style and Iconography at Amaravati An Early Indian Bronze Figure An Early Indian Toy The Later School of Amaravati and its Influence A Group of Bronzes from the Deccan Ter Painting of the Deccan Some Unpublished Deccan Miniatures Painting at Bijapur An Early Bronze Lingodbhoramurti Two Lost Early Cola Temples A Bronze Srinivasa Group A Group of Bronzes of the Later Cola Period The Chidambaram Nataraja Two Pandhya Temples The Dancing Siva in Early South Indian Art Additional Notes Index