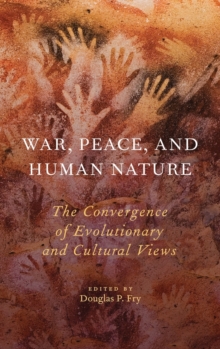 War, Peace, and Human Nature : The Convergence of Evolutionary and Cultural Views Hardback

Have humans always waged war? Is warring an ancient evolutionary adaptation or a relatively recent behavior-and what does that tell us about human nature?

The essays in this book demonstrate that humansclearly have the capacity to make war, but since war is absent in some cultures, it cannot be viewed as a human universal. And the archaeological record reveals the recent emergence of war.

It does not typify the ancestral type of human society, the nomadic forager band, and contrary to widespread assumptions,there is little support for the idea that war is ancient or an evolved adaptation.

This book shows that views of human nature as inherently warlike stem not from the facts but from cultural views embedded in Western ways of thinking. Drawing upon evolutionary and ecological models; the archaeological record of the origins of war; nomadic forager societies past and present; the value and limitations of primate analogies; and the evolution of agonism and restraint; the essays in this interdisciplinary volume refute many popular generalizations and effectively bring scientific objectivity to the culturally and historically controversial subjects of war, peace, and human nature. 'This encyclopedic collection of excellent, wide-ranging, and myth-busting essays by renowned scholars should be required reading for anyone interested in how we came to be who we are and the future of humankind.

A much-needed paradigm shift is in the making because of the increased recognition that we are not inherently destructive and competitive beings.

This remarkable book will facilitate this transition as we expand our compassion footprint and give peace the chance it deserves. Cooperation, empathy, and peace will prevail if we allow them to.' - Marc Bekoff, author of The Emotional Lives of Animals, Wild Justice: The Moral Lives of Animals, and The Animal Manifesto: Six Reasons For Expanding Our Compassion Footprint