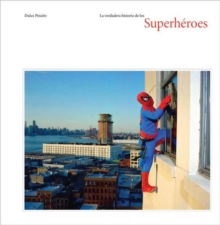 The Real Story of Superheroes Hardback

The Mexican immigrant worker in New York is a perfect example of the hero who has gone unnoticed. It is common for a Mexican worker in New York to work extraordinary hours in extreme conditions for very low wages which are saved at great cost and sacrifice and sent to families and communities in Mexico who rely on them to survive. The Mexican economy has quietly become dependent on the money sent from workers in the US.

Conversely, the US economy has quietly become dependent on the labor of Mexican immigrants.

Along with the depth of their sacrifice, it is the quietness of this dependence which makes Mexican immigrant workers a subject of interest. The principal objective of this series is to pay homage to these brave and determined men and women that somehow manage, without the help of any supernatural power, to withstand extreme conditions of labor in order to help their families and communities survive and prosper. This project consists of 20 color photographs of Mexican immigrants dressed in the costumes of popular American and Mexican superheroes. Each photo pictures the worker/superhero in their work environment, and is accompanied by a short text including the worker's name, their hometown in Mexico, the number of years they have been working in New York, and the amount of money they send to Mexico each week.