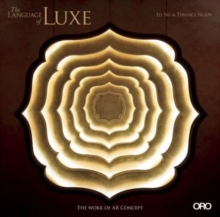 The Language of Luxe Hardback

Founded over a decade ago, AB Concept has confirmed its position as one of Asia's most ambitious, forward-thinking architectural and design firms.

Honoured with an array of international awards, AB Concept has been behind some of the world's most acclaimed executive developments as well as hospitality and residential projects.

For the first time in their decade-long history, co-founders Ed Ng and Terence Ngan have compiled their stunning projects into one collection, Language of Luxe by AB Concept.

Chronicling their projects over 300 pages, Language of Luxe maps AB Concept's evolution, offering an insight into the team's creative process and artistic vision.

As Ed and Terence are authorities in their field, government bodies - including Create HK and Hong Kong Trade Development Council (HKTDC) - regularly invite them to speak at public forums to promote Hong Kong as a design hub.

Innovative and adventurous, Ed and Terence's designs are daring explorations of space and style, each one revealing their genuine respect for history, culture and the arts. Based in Hong Kong and with an office in Bangkok, Ed and Terence are part of a new generation of Asian designers who are bringing a cross-cultural aesthetic to their designs and making an impact on the international scene.

Driven to create sensual spaces that seamlessly integrate form and function, their style dictum is simple: Understated rather than overkill.

Together with select residential developments, Language of Luxe captures AB Concept's most acclaimed hospitality projects, including the SPA at the Mandarin Oriental Singapore, the W Retreat & Spa in Bali and Shangri-La's Far Eastern Plaza Hotel, Tainan.