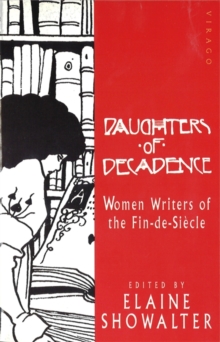 Daughters Of Decadence : Stories by Women Writers of the Fin-de-Siecle Paperback / softback

At the turn of the century, short stories by- and often about- 'New Women' flooded the pages of English and American magazines like The Yellow Book, The Savoy, Atlantic Monthly and Harpers.

This daring new fiction, often innovative in form, and courageous in its candid literary aspiration, shocked Victorian critics who parodied the experimental stories in Punch as symptoms of fin de siecle decadence, or denounced the authors as 'literary degenerates' or 'erotomaniacs.' This collection brings together twenty of the most original and important stories, including such little-known writers as Victoria Cross, George Egerton, Vernon Lee, Constance Fenimore Wollson and Charlotte Mew.

Ranging from the lyrical to the Gothic, and frequently dealing with the conflicts of women artists, the short fiction of the fin de siecle is the missing link between the Golden Age of Victorianism women writers and the new era of feminist modernism.