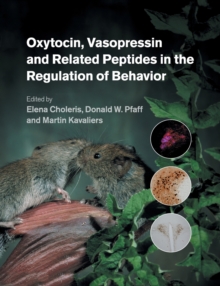 Oxytocin, Vasopressin and Related Peptides in the Regulation of Behavior Paperback / softback

The mammalian neurohypophyseal peptide hormones oxytocin and vasopressin act to mediate human social behavior - they affect trust and social relationships and have an influence on avoidance responses.

Describing the evolutionary roots of the effects that these neuropeptides have on behavior, this book examines remarkable parallel findings in both humans and non-human animals.

The chapters are structured around three key issues: the molecular and neurohormonal mechanisms of peptides; phylogenetic considerations of their role in vertebrates; and their related effects on human behavior, social cognition and clinical applications involving psychiatric disorders such as autism.

A final chapter summarizes current research perspectives and reflects on the outlook for future developments.

Providing a comparative overview and featuring contributions from leading researchers, this is a valuable resource for graduate students, researchers and clinicians in this rapidly developing field.