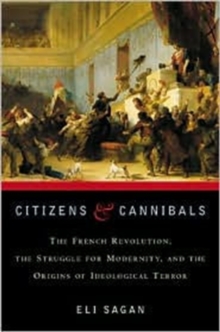 Citizens & Cannibals : The French Revolution, the Struggle for Modernity, and the Origins of Ideological Terror Hardback

Why did the French Revolution, informed by Enlightenment principles of liberty, equality, and fraternity, end in the Great Reign of Terror?

How could once moral citizens transform themselves into bloodthirsty "guillotine cannibals" bent on slaughtering their political opponents?

For generations, these questions have mystified historians.

Until now. In Citizens and Cannibals, noted scholar Eli Sagan argues that France's failed evolution into a modern state introduced to the world a previously unknown scourge with catastrophic consequences: ideological terror.

France's passage into social and political modernity held for its citizens both great promise and great anxiety.

Sagan analyzes this anxiety and demonstrates why the ensuing ideological terror is common to many societies in transition, including the transformations of Weimar to Nazi Germany, Czarist to Soviet Russia, and agrarian to Communist China.

While the French Revolution may have introduced ideological terror to the world, Sagan makes it clear that Hitler, Stalin, and other dictators have perpetuated its existence time after time.

In fact, Sagan concludes that the seeds of ideological terror remain present in all modernizing societies, at all times, and if given the proper conditions they will germinate in a very predictable way.

As in his previous books, Sagan explores the past to illuminate the political strengths and moral shortcomings of all democratic societies, past, present, and future.

With this brilliant new analysis of the French Revolution, he reminds us once again that the past can still teach us a great deal about our modern predicament-specifically, why all political progress must come at grave cost.

Citizens and Cannibals is a rigorous work of history and profound psychological insight that offers readers the most comprehensive explanation of the great ambiguities and contradictions of the modern world.