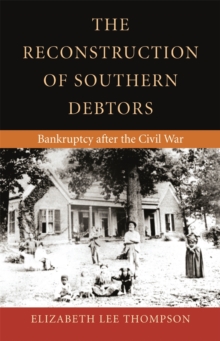 The Reconstruction of Southern Debtors : Bankruptcy After the Civil War Hardback

Based on a careful empirical study of nearly four thousand cases filed in three southern federal districts, this book focuses on how the Bankruptcy Act of 1867 helped shape the course and outcome of Reconstruction.

Although passed by a Republican-dominated Congress that was commonly viewed as a punitive towards the post Civil War South, the Bankruptcy Act was a great benefit to southerners.

In this first study of the operation of the 1867 Act, Elizabeth Lee Thompson challenges previous works, which maintain that nineteenth-century southerners uniformly opposed federal bankruptcy laws as threatening extensions of federal power.

To the contrary, Thompson finds that southerners, faced with the war's devastation, werte more likely to file for bankruptcy than debtors in other parts of the country.

The act thus was the major piece of federal economic legislation that benefited southerners during Reconstruction.